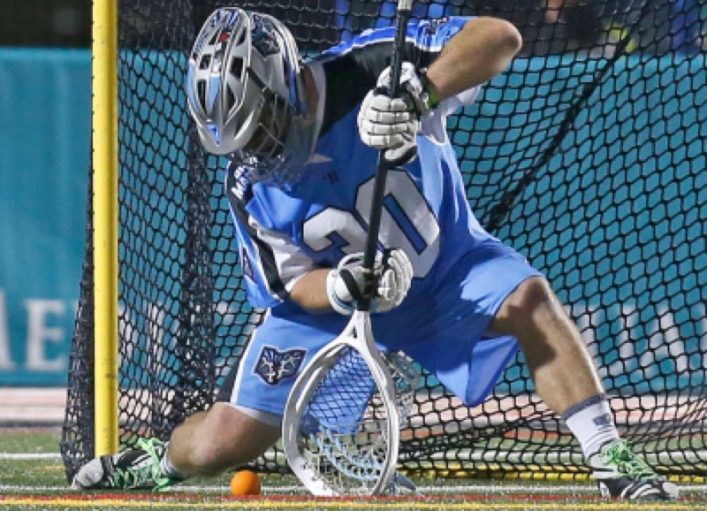 The “five-hole” is a nickname for the space between a lacrosse goalie’s legs and for some goalies making consistent saves on five hole shots is the biggest challenge they face.

As I’ve discussed my simple way to think about saves, the strategy for making saves to any part of the goal is the same.

However for those that consistently struggle to save shots to their five hole, here is some advice to keep in mind.

Most goalies have a difficult time with low shots, including 5 hole, due to mechanical issues with their stance and problems with their feet.

So before we discuss specifics on low shots, review your stance. Are you setup in the perfect lacrosse goalie stance?

There is no single correct stance as many goalies succeed with slightly different styles, however for the perfect stance in my keepers, I focus on the following:

Bad footwork and stances are pretty common amongst newer goalies. It takes a lot of practice and repetition to consistently put your body in a great stance, especially when an All-American attackman is winding up to crank one at you.

Most of time when goalies struggle to get to low shots its because they are violating some element of a good lacrosse goalie stance.

Proper Weight Distribution in your Stance

One method of determining if you’re setup properly is – can you take off on a sprint at the snap of my fingers?

Like the setup of an NFL linebacker, if you can immediately go into a sprint from your goalie stance without any real hesitation you’re setup right.

If you find yourself falling forward at fake shots, you likely have your weight too far forward. As a coach, during warmups I’ll throw in a few fake shots just to ensure the goalie remains balanced.

During practice or a game, have a coach or parent take some video of your play. Reviewing video really helps identify problems in your stance and other areas of your game.

A mistake you might not feel on the field will become glaringly obviously when you take a look at it on video.

If you’re setup in the proper stance you’ll notice your weight distribution is such that your body tends to fall forward a little. 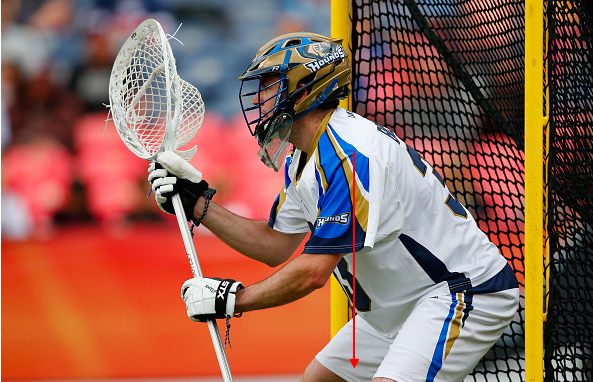 If you draw a vertical line from the shoulders downwards while in your stance, the line should pass through your knees and down through the balls of your feet.

If it doesn’t you’ll likely too far back in your stance, sitting on your heels.

And this type of setup makes it extremely hard for a goalie to make those low saves and to react down quickly enough to stop five hole shots.

When some goalies get nervous, their body and their grip tends to get tight.

Unfortunately, this is the exact opposite of what an elite goalie wants.

We want our body to be extremely relaxed, ready to react. We want our grip on the stick, especially the top hand, to be loose.

If you’re “choking” the stick with a tight grip, you’re going to be slow to get to the lower shots.

So when you’re practicing saving low shots or 5 hole shots be sure to open up your hands a little. This will allow for the proper stick rotation to get that head down low in time to make the save.

The only way to lose those nerves that result in a tight grip and a tight body is to get that real game or real practice experience. So if you’re nervous and tight at first, don’t worry with time and experience that will go away.

Get Down a Little Lower in your Stance

If you’re a taller goalie, by nature, when you setup in the proper stance you’re not going to be as close to the ground as a smaller goalie.

If you review game footage of your goalie play or check your lax goalie metrics and realize that you’re not giving up many goals upstairs I would consider a slight adjustment in your stance.

I always encourage goalies to setup in a lower stance because I think its easier to explode your body upwards then it is to explode downwards.

I was not a tall goalie (5’8″) and yet I still liked to setup relatively low. This exposed the top areas of the goal which I felt was much easier for me to save then shots at my feet or my 5 hole.

So another tip if you’re struggling on 5 hole saves and yet have a good grasp on stick-side high and off-stick high shots: get setup in a lower stance by bending your knees and legs more than before.

Regardless of whether or not you setup in a lower stance, when you go through the process of making a five hole save your hips and body should finish low.

Getting your hips low to the ground will help get your stick into position and will even result in a few saves when your stick doesn’t arrive time.

This tip is really only useful at the youth level.

Most youth and female players don’t have to the ability to shoot low to high. It’s an advanced shot that takes a lot of strength and technique that most youth players haven’t yet developed. 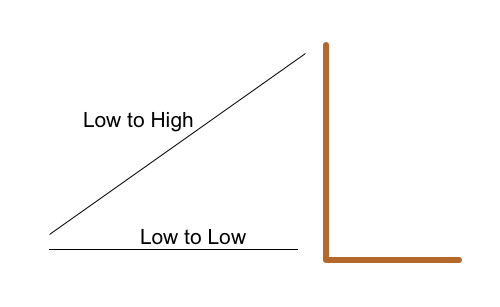 Therefore as a youth or female goalie if you see the shooter’s stick and hands drop, there’s a pretty good chance that shot is coming in low.

As you see a shooter’s hands drop, you can cheat even lower in your stance and lower your hands as well in preparation for that low shot.

Getting your hands and body low before the shot will help you be in great position to make that five hole save.

As you get to higher levels of lacrosse you’ll see that shooters can now accurately place that low to high shot. Therefore I really only recommend this approach at the youth level.

There are a number of lacrosse goalie drills that work your general save technique while at the same time will help you make 5 hole saves.

I’d focus on those drills for improving 5 hole save ability.

If you’re a goalie struggling to make saves on shots to your five hole, the 1st thing I’d recommend is check your stance.

The majority of the problems I see related to goalie’s inability to make low saves (including 5 hole) stem from a poor setup.

Once the setup is corrected you should ensure you have proper weight distribution and a nice light grip on the stick.

For shots to the 5 hole make sure you’re getting your hips low to help get your stick and body in proper position to make that save.

Work on these elements in your drills and hopefully you can turn your 5 hole into a strength, not a weakness.

What tips do you have for improving your 5 hole saves? Let me know in the comments below.

2 thoughts on “Five Hole Shots: The Key to Consistent Saves” 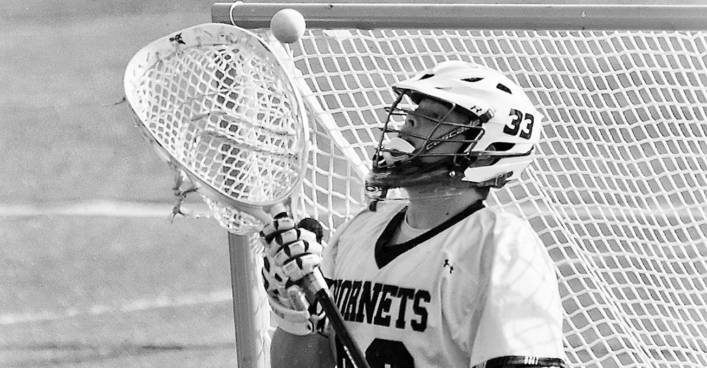