Jordan Burke on How He Became a Great Lacrosse Goalie

By Coach Damon on December 5, 2016
Posted In: General, Lacrosse Goalie Any way you slice it Jordan Burke has had a tremendous career as a lacrosse goalie.

He attended Brown University where he dominated. As a senior at Brown in 2009 he was a finalist for NCAA lacrosse’s version of the Heisman Trophy, the Tewaaraton Trophy. That same year he won USILA Goalie of the Year and was a 1st team All-American.

As a junior he was ranked #1 in save percentage and #2 nationally in goals-against average. He’s the only 2-time Ivy League player of the year in conference history, winning that award in back to back years.

“Brown Lacrosse has been blessed throughout its 60-year history to have many outstanding goalies standing in as the last line of defense.  But no one did more for Brown than Jordan Burke,” said Brown University Head Coach Lars Tiffany.

After Brown his success carried over into lacrosse’s ultimate level, the MLL where he was selected in the 2nd round of the 2009 MLL draft by the Boston Cannons. He is the Boston Cannons all-time leader in games played in goal, wins, saves, and was the 2011 Championship Weekend MVP. In 2011, Burke led MLL with seven wins and a 61.5% save percentage. Just recently Jordan Burke announced his retirement from the MLL.

Basically when I write about emulating the great lacrosse goalies in our game, Jordan Burke is one of them.

What is a typical game-day routine like for you? Any superstitions?

I’ve tried to tone down on superstitions over the years.  Goalies always have a few quirks though.  I normally don’t shave during the week until after the game.

What are some unconventional methods you use to prepare for a lacrosse season?

I rely heavily on yoga for flexibility, its a requisite trait of good goalies. Sometimes you’re moving across the goal and the ball can move from one side of the field to another in the blink of an eye. You find yourself lunging over to the other side of the net to try to make a save.

I stay in shape by running at least three times a week and keep up my core strength through yoga and by lifting weights. Three miles is a typical run for me, though sometimes I extend it to eight to 10 miles.

In the winter months, I play in a Boston-area men’s hockey league to keep my reflexes sharp.

Being active and playing other sports helps so much, whether it’s hockey or pickup basketball. Those quick muscle reflexes are hard to work in the weight room or through running.

What were some of the things that drew you to commit to playing lacrosse at Brown?

The school, first and foremost.

I always give young players going through the recruiting process this piece of advice: Choose a place where you’d be happy being every day even if you suffered an injury and weren’t able to play lacrosse anymore.

Brown is a great place both for lacrosse and academically. Once I came and visited campus and got to meet the guys on the team, it was an easy decision for me.

Jordan, I am a goalie and have watched some of your games. I was wondering why do you play with such a high arc? Should I play with a high arc?

A lot of goalies play with different style arcs. In high school I played with a really high arc, but I’ve worked on staying back more in college. Now I use a flatter arc.

You’ve got a few IAC (Interstate Athletic Conference) guys on the roster at Brown. How often do the results of those games come up in conversation? I’m guessing you heard from the Albans kids after they won the IAC a couple years ago. Also, did you really play intramural ice hockey for four years at Brown?

Yeah, its nice to have a bunch of IAC guys here. But I live with them, and I definitely hear it from them whenever they beat Bullis.

St. Albans winning the IAC a few years ago resulted in a lot of S-T-A! chants. I’m just waiting to get back at them. And yes, I played IM hockey and Club Hockey here for four years. It was too tough for me to give up on the sport that I loved first.

How important is flow?

Haha, I think flow is an essential part of the game. You have to have at least a few guys on your team with nice flow in order for your opponent to take you seriously. Mine isn’t great, but defenseman Peter Fallon has first team All-American flow.

Coach Damon – If you have no idea what flow is, you’ll want to checkout my quick guide to lacrosse slang. Then get busy working on your flow.

You are such a great goalie, but I heard you were a better baseball player. How did you discover lacrosse, and why did you start playing goalie?

I’d have to give credit to Duke Dman Tom Clute. He persuaded me to come out and play goalie for the middle school lacrosse team.

I’m actually not even sure why I said yes…his wonderful golden lax flow was pretty convincing at the time.

I am thinking about switching to goalie, but am worried I might not be able to take some of the shots. What is the hardest you have ever been hit with a ball and who shot it? Ever bend a face mask?

Don’t worry, you’ll be fine. After you get hit in one spot, it doesn’t hurt the next time. I’m not sure what the hardest shot thats hit me was.

In high school I had a bruise from a couple shots from my chest to my elbow. And I did have one shot bend my face mask. I had to hammer it back into place at halftime.

Coach Damon – I’d add that as a goalie you eventually stop fearing the ball. Each time you get hit, especially in a game, its usually a feeling a joy because that means you just made a save. Games bring out the adrenaline. After you’ve been playing goalie for a while if you still fear the ball, perhaps this position is not for you. Lacrosse goalies have a screw loose for a reason.

My current goalie stick setup is this:

Especially interesting to note that even during his college days, Jordan continued to play hockey. He also was a great basketball player. Showing once again how valuable it is to play another sport to increase your lacrosse goalie skill.

Yoga is another thing that you don’t often hear about but I can easily see how yoga could be extremely beneficial to goalies.

Hope this compilation of interviews with Jordan Burke was helpful for you and that you learned a thing or two. 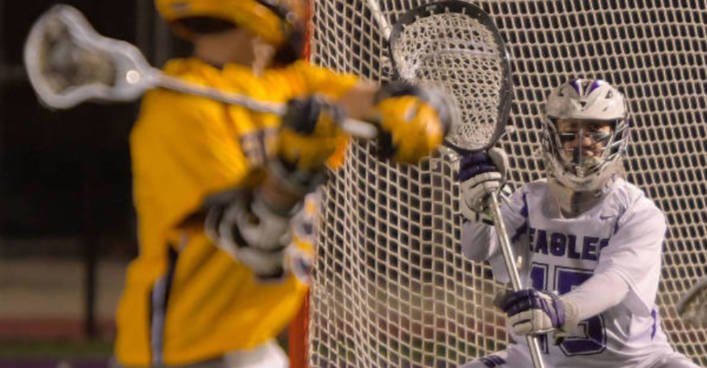 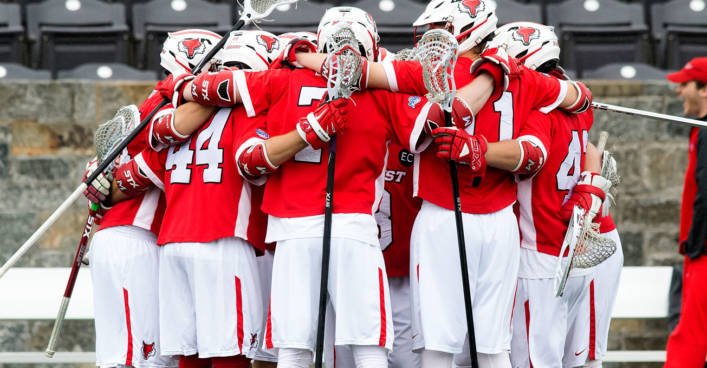