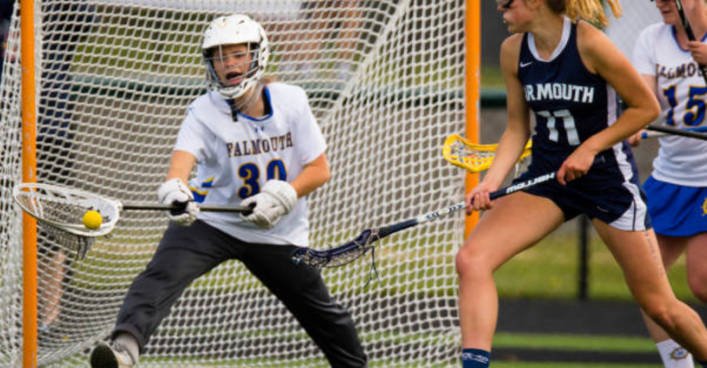 Hi everyone! Coach Damon here and this week I’m back with more lacrosse goalie video analysis.

Watching and analyzing other goalies is a great way to learn. We can always pull out lessons from both their failures and successes.

I’ve done this sort of video breakdown analysis in the past. So if you like this style of post be sure to checkout these links:

This time I’m going to analyze a few clips from female goalies. I am a male and I’ve pretty much exclusively worked with male goalies but I understand there’s a lot of female goalies out there looking for specifics.

I’m a firm believer that the goalie fundamentals that work in the male game also apply to the female game. So if you’re a male goalie reading this, understand that these principles also apply to your game.

Let’s take a look at a few clips and dig into some lessons learned that you can use to up your own goalie game.

Devon Wills is a goalie for the female USA national team. The ex-Dartmouth star is one of the best female goalies out there.

In this clip however she finds herself a little out of position when it comes to playing the ball at X. And that leads to an easy goal for her opponents.

Here is the full play:

When I coach goalies on how to play the ball at X, the first thing we cover is proper positioning.

When the ball is back right or back left, we coach to setup on the opposite side of the goal from where the ball is.

Here is a pic of me demonstrating that opposite positioning. 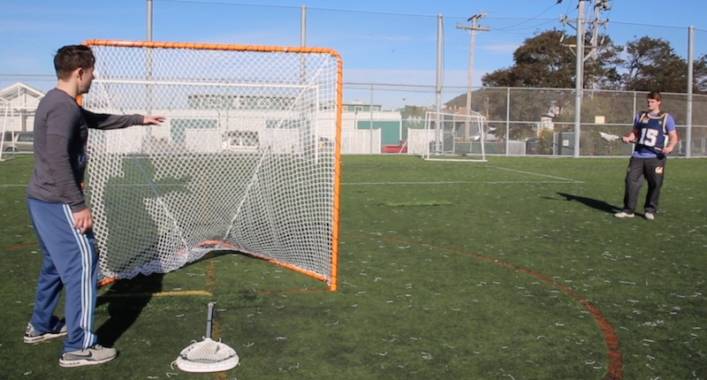 This might be a little counterintuitive to many new goalies but it is the correct approach to proper backside positioning for lax goalies.

In this setup we’re always only one pivot away from being in the right position no matter what the feeder does – dodge, feed to her left, feed to her right. 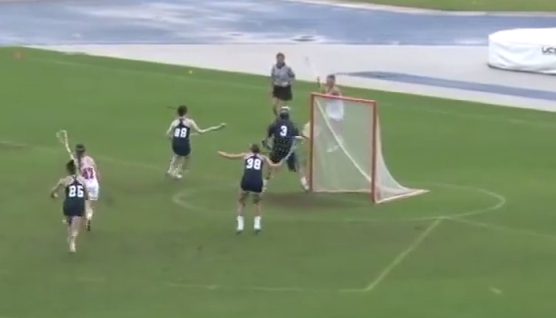 The shooter isn’t a threat to score from that position. As you can see in the video her body language suggests she is looking to feed, not score.

Team USA could be running some sort of defensive trap type defense which could explain the positioning but it’s poor defense either way. Especially on a restart play with Team USA #25 starting behind her mark on the restart.

In this position Wills can’t keep the play in front of her. As you see in the video a feed gets through and the keeper is way out of position to even make an attempt at a save. 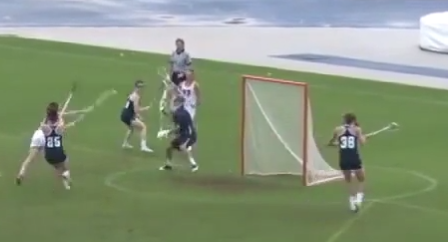 If Wills was setup opposite of the feeder, 1.) see might have been able to see Syracuse #47 cutting wide open to the goalie and let her teammate #38 know to slide over and 2.) with a single quick pivot she’d be in better position to make a save when the feed goes through.

Perhaps the play still results in a goal but at least she’d have a chance at making a big one on nothing save.

Understanding the proper way to ball goalie with the ball at X can mean the difference between easy slam dunk goals and saves.

This next game clip comes from the 2017 NCAA national championship female game – Maryland vs. Boston College.

Throughout the game Boston College goaltender Zoe Ochoa plays a pretty high arc. There’s nothing wrong with a high arc, it’s how I played at times when I was in college.

But even if your style of play favors the high arc I think there are game situations that warrant an adjustment.

It comes off of a restart. Right away you can see that the Boston College defense is in a bad spot as not only does the ball carrier #15 have a clear path to the goal but she also has a wide open teammate even closer to the goal.

Ochoa starts the play setup flat on the arc but then jumps forward right before the play begins and by the time the shot arrives she is so high she is outside of the crease. 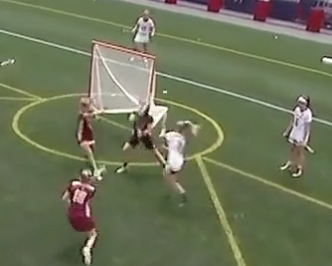 I think a high arc makes a lot of sense in certain situations. Such as in the women’s game on a restart where you’re confident the ball carrier will shoot.

But in this case with a wide open teammate standing close to the goal we’re not confident she’ll shoot.

If Ochoa were to hold the pipe, in the same position she starts the clip in, Boston College has a cross cage slide coming to help so it’d be tough for the Maryland player to come across the face fo the goal to beat Ochoa far pipe.

I think it’s too hard to defend 1×1 situations in a high arc.

Lacrosse players, both in the male and female games, can change the angle of release so quickly that getting right in their face is rarely an effective method to save a 1 on nothing shot. It’s simply too easy to shoot around or over top the goalie.

Even if you are a goalie who favors the high arc, I don’t think you ever want to be outside the crease.

The game of lacrosse just moves too fast that you’ll easily find yourself way out of position and giving up easy goals.

Also, in the event you do make a save, any rebound is going to be right into the field of play as opposed to being shielded by the protective crease.

That exact play actually happens to Ochoa at another point of the same game resulting in a Maryland goal:

So like I said, I’m all for a high arc if that’s your style of play. But I think there certain game situations that warrant a change in play to help prevent goals.

In my post on improving your ability to save low shots, one of the tactics I discuss is reading the shooter.

In the youth game and in the women’s game its very difficult to shoot low to high. The youth haven’t developed the strength and technique and the shallowness of the women’s crosse makes a low to high shot tough.

So when a shooter lowers their hands and their stick head we can be fairly certain that shot is coming in low.

Check out this clip:

In this case #32 Riley Hertford, who is headed to USC, anticipates that low shot and makes a nice save.

Another point is that when the ball carrier is engaged with a defender or on the run (as is the case here), we can be even more confident that low hands and a low stick head mean a low shot. 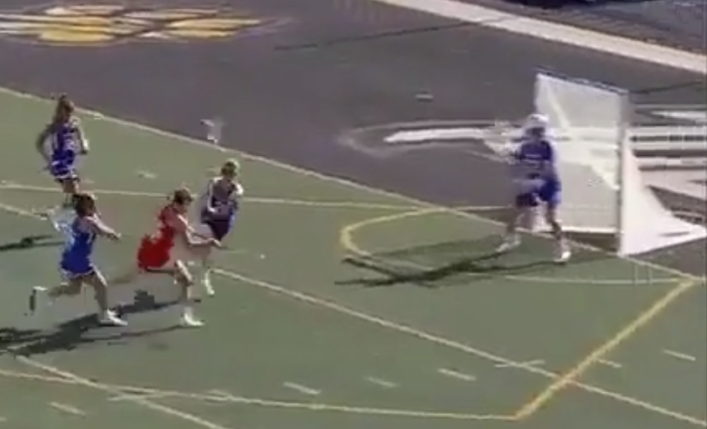 Listen if she can rip a low-to-high shot on the run while engaged with a defender. As a goalie we simply tip our hat, scoop the ball out of the goal and move onto the next play.

Until then we lower our hands and stance in anticipation of receiving a low shot.

As I mentioned in the intro I’m a firm believer that while the games are different, lacrosse goalie fundamentals are the same in the female game vs. the male game.

By watching and analyzing game video we can pick out some fundamentals and learn from other goalie’s failures and successes to help our own game.

The tips we call out above while they do occur in female lacrosse games are also 100% valid for the men’s goalies as well.

Hope you learned something from this round of video analysis. 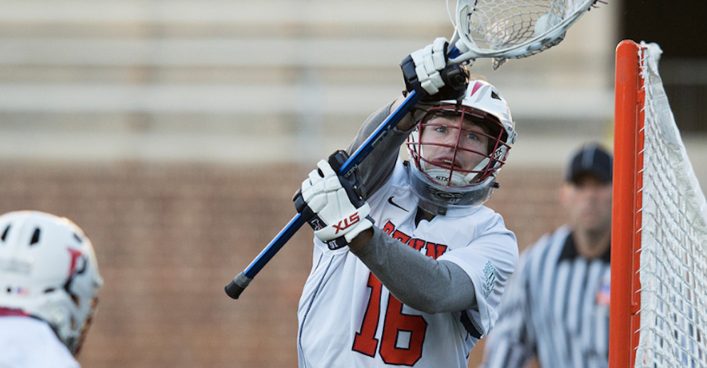 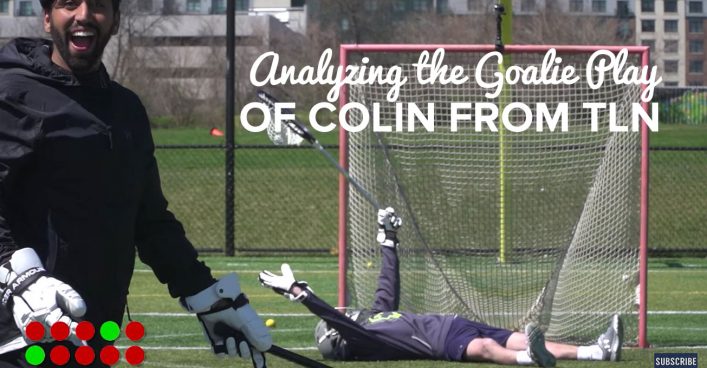 Analyzing the Goalie Play of Colin from TLN