How to Make a One-on-One Save: The Art of the Stuff | Lax Goalie Rat

During every goalie’s career and even perhaps several times a game you’re going to encounter the situation where there’s nothing between you and an attackman with the ball.

Even goalies with the best defense in the league will need to make one-on-one saves. It’s a common part of the game.

While the odds are heavily skewed in the offensive’s favor in a one-on-one situation, making that one-on-one stuff can change the momentum and often the result of the game.

As a goalie, there’s no better feeling than making a 1v1 stuff.

Here are my tips for lacrosse goalies for making those one-on-one saves.

Start with a statement of the obvious. Saving a 1 on 1 opportunity is incredibly difficult for a lacrosse goalie.

Add in the fact that the lacrosse stick is built to throw easy, quick fakes that could fool a goalie.

Then factor in that shooter has a large 6′ by 6′ area in which to deposit the tiny ball, and we see that the odds of scoring are overwhelmingly in the scorer’s favor.

Thus, as a goalie we cannot get discouraged when someone scores on us 1 v 1.

But that does not mean we should give entirely on trying to save the ball. Because as I mentioned in the intro, I’ve seen one-on-one saves made by goalies change the entire momentum of a game.

Bait the Shooter. I’ve previously written about the art of baiting the shooter. There’s no better time to bait a shooter then when he’s in close in a one-on-one situation.

The idea behind baiting is that we’ll setup in our stance purposely exposing an area of the goal. The attackman seeing all that open area shoots exactly where we’re expecting.

To bait the shooter high, setup in your stance lower than normal bending at the knee. Also drop your hands purposely exposing the upper zone of the goal.

Then when the shooter releases we spring out of our low stance and save the high shot. Here’s a perfect example –

This clip also has the benefit of a punishing hit laid by the defender – wow! But notice how Schwartzman remains low as the attacker drives. He springs out of his stance after the shooter has committed to his aerial shot and makes the one-on-one save.

Baiting low is of course the exact opposite as what I described above. Setup with high hands and only slightly bent knees (never lock your knees as it slows down reaction time).

This technique exposes the lower part of the goal. Many attackman after seeing this will attempt a dive shot or a regular low shot and since the goalie is expecting him to shoot there, the save is easier.

But with baiting, go with what works for you. If you’re a taller goalie and find yourself getting scored on low too frequently, in practice try baiting attackers high and see how it works for you. Then bring the technique into a game situation when its battle tested.

Cut Down the Angle When Right on the Crease. When the shooter is right on the doorstep we want to step out as much as possible to cut down the angle.

Otherwise, the shooter simply sees too much goal. Meaning he/she has too much open area to shoot at.

Step out at the moment where the shooter has no option to shoot around you because the defenseman are bearing down on him.

Here’s an excellent example of that in action also from Jesse Schwartzman.

Notice as the ball is fed into the crease creating a one-on-one situation, Schwartzman is already on the move.

When the shooter catches the pass, the goalie is off his normal crease arc and out towards the shooter. With less area to shoot at Schwartzman has limited this attackman’s options and he’s ready to make the high save when the shooter releases.

Also notice how he moves with balance. He’s moving out to cut down the angle and as he arrives in the spot closer to the shooter he’s totally balanced, ready to pounce in either direction depending on where the shot goes.

That’s why Jesse Schwartzman holds the MLL record for save percentage and led his to team to undefeated season.

Wait Through the Fakes. If the shot is taken from 1-3 yards out, the best policy is to not react until you absolutely see the ball come out of the shooter’s stick. Don’t bite on the attacker’s fakes.

This is the same strategy for a normal outside shot, no difference there.

However when the shooter is right on the doorstep, unfortunately we don’t have this luxury not reacting to fakes. In this case, we must mirror his stick with our stick.

You’ll notice as you get more and more experience that the majority of shooter’s attempt to fake high and then shoot low. However we should not be going for the fakes regardless of where they are.

Here’s a good example not biting on fakes from MLL goalie of the year John Galloway. While this shot may not be exactly one-on-one since the defense is contesting it, notice how Galloway doesn’t bite on the attacker’s initial fake. He’s then in great position to make the one-on-one save once the ball does get released.

Many youth goalies bite on that fake, perhaps even dropping to their knees leaving a completely exposed goal for the attacker to shoot at.

Do not attempt to leave the crease to body check the shooter. Perhaps I’m biased against this technique because I’m a smaller goalie but I always felt my best chance to gain possession was to make a save, not hit the shooter.

At only 5’8″ and 160lbs, bigger attackman would simply shrug off my attempted hit and deposit the ball in the empty goal.

If you’re a larger goalie and find yourself in a situation where a smaller attackman is not looking at you (perhaps looking away to catch a pass) then this technique may work.

For example, MLL goalie Scott Rodgers is 6’4″ and built like an NFL linebacker. In that case, hitting the shooter may be viable option.

But for all beginning goalies and especially youth goalies, I recommend you do not attempt to come out and hit the shooter in the attempt to dislodge the ball.

Stay back in the goal and focus on making the 1×1 save.

If the goalie is taking a series of shots with no defenders even in the picture its probably a sign the defense needs some work.

Far more common is the situation where a defender is guarding an attackman as he drives from X towards the goal.

If there is a defender harassing the shooter who is attacking the goal, the lacrosse goalie needs to read the situation to improve his chances of making the one-on-one save.

If your D-man has his pole on top of the attackman hands and that attackman drops his stick, there’s no way he can lift his hands to shoot high.

So as a goalie we know we can match his stick down low and get ourselves into the position to make a low 1×1 save. We can even cheat a little and move to that position a millisecond before the shot because again the defender is preventing him from shooting high.

On the other hand if the defender is lifting the attackman’s hands, we know that player won’t be able to fake high and shoot low.

So in this scenario we hold our ground high and wait for the shot, matching our goalie stick to the attackman’s stick.

By reading how the defender is playing his attackman we can get a better sense of where the shooter must shoot.

You have a better shot at bringing a water bottle on an airplane than scoring on @adam8taylor 🙅‍♂️ pic.twitter.com/uRY4jEtCds

Drills To Improve One-on-One Save Ability

It’s hard to exactly recreate a 1v1 situation outside of a game, as the adrenaline factor does not come into effect during practice.

However one of the best drills for improving your one-on-one shot stopping is the Mystery Shot drill that I discussed in this post on 10 amazing lacrosse goalie drills.

In this  drill we place a goal 8-10 feet in front of a wall. The goalie also faces the wall with the coach out of sight. A coach will ricochet shots of the wall and the goalie must make the save. 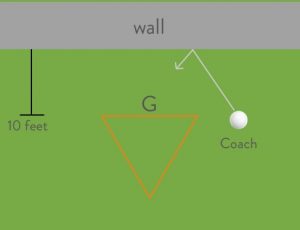 This drill forces you to not react until you actually see the ball and will improve your reaction time and quickness dramatically. Two important elements in making a one-on-one save.

During your team’s normal practice you’ll also naturally encounter one-on-one situations. So as you get more experience in your lacrosse career you’ll get more and more comfortable with saving one-on-one shots.

If you’re not seeing enough 1v1 situation in practice, the coach should have the team run some drills where these situations will naturally occur as they are very important not only for the goalie but also for the attacking players to learn how to score in that situation.

Here is the Big Rig, current Ohio Machine and ex-Notre Dame star talking about how he goes about saving one-on-ones.

I love the idea of recognizing different players finishing patterns and then using that to beat them and make that huge save!

In reality, the odds of saving a one-on-one shot from inside 2 yards are very low.

But the tips, techniques, and drills outlined in this post will help improve the odds in your favor.

And as you make more and more stuffs from inside your confidence should grow to the point where you believe you can stuff any attackman bold enough to attempt a one-on-one shot on you!

And also remember making a one-on-one save is such a huge moment in a lacrosse game and can instantly transform the goalie into a hero.

Any other tips for stopping shots from very close range? Let me know in the comments.

4 thoughts on “How to Make a One-on-One Save: The Art of the Stuff”