Low Saves: Drop to Your Knees or Stay on Your Feet? | Lax Goalie Rat

When we’re talking about making low saves as a lacrosse goalie: there are 2 schools of thought.

Some coaches teach kids to drop down to their knees for saving low shots.

Other encourage goalies to stay on their feet to make all saves – including those coming in at their ankles.

In this post I want to analyze the pros and cons of each style of making low saves.

Should you drop to your knees or stay on your feet to make low saves?

Dropping to Your Knees

Some goalies and goalie coaches prefer the strategy of dropping to the knees to make a save on a low shot or wormburner.

The primary benefit of dropping to your knees is getting your body low in a quick manner.

Instead of just having your stick low with legs as backup you now have more of your body providing backup to the stick.

If the goalie tosses in a little butterfly split a la ice hockey goalies then the legs occupy even more space in the cage for a potential save.

Here is Trevor Tierney giving his lesson on that technique:

Watch a Trevor Tierney coached goalie play like the 2015 Ryan LaPlante and you see this technique in action. Dropping to the knees to help block lows shots.

If the goalie is really tall even when dropped to the knees you still might be able to reach a high shot, kinda like this – 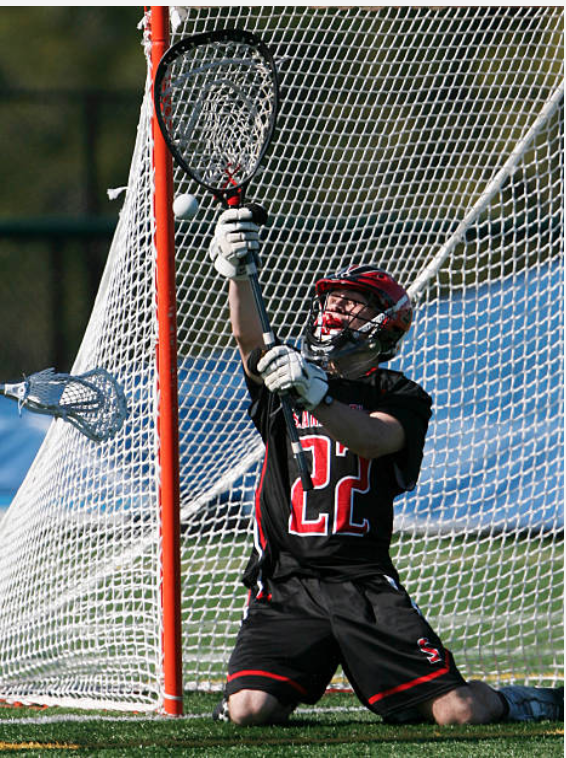 Here’s the Goaliesmith guys giving a demo of this split-save technique:

Split Save Technique: 1. Make a long first step out towards the shot 2. Land on the side of your outstretched leg to break the fall #goaliesmith #technique #splitsave

Dropping to your butt or using this split save technique offers the same set of advantages that dropping to the knees does.

Mainly you can get a little more of your body behind the shot.

Interestingly enough I’ve watched a lot John Galloway training videos and even spoken about his technique for a podcast episode.

Never once did he mention dropping to his knees for low shots.

And yet you often see photos of him ending up on his knees or butt during saves. 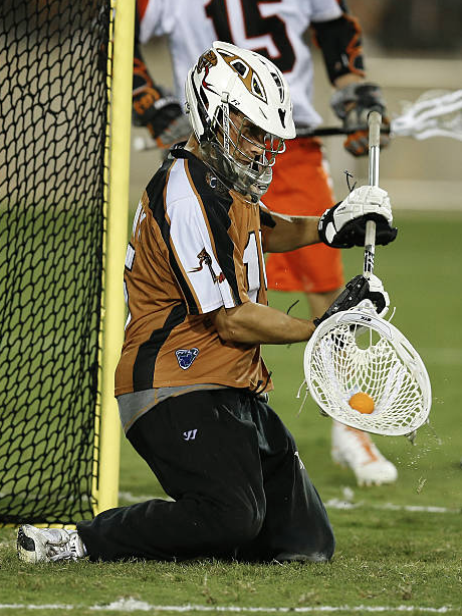 I emailed future Hall of Fame goalie John Galloway about this. Asking him why he ends up on the ground for low saves even though I’ve never heard him teach that technique.

File this one under: do anything you can do to make a save.

So for some goalies even though they don’t practice or train this dropping technique when game time rolls around they do anything they can to make the save.

One the major disadvantages of dropping to your knees is the horrible position you’re left in the event you do make a save.

You won’t be in good position to make another save should the offensive team scoop up your rebound and attempt to score.

You also won’t be in good position to throw a quick outlet pass. You’ll have to first get to your feet and regain balance or else risk throwing a super risky pass from your knees.

Sometimes that split second (or full second) it takes to get back to your knees will mean that wide open middie is now covered.

When dropping to your knees is your instinctual behavior, it’s also very easy to be fooled on bounce shots were you drop to your knees and the ball bounces up over you into the goal.

The pic above (goalie in black) is a good example. That ball comes in at normal chest height and he’d probably have a better chance of saving that shot by staying on his feet.

Stay On Your Feet For Low Saves

The other technique – and the one that I teach – is to stay on your feet for low saves.

I think goalies make more saves over time staying on their feet.

Here’s another Goaliesmith clip showing low save technique when staying on your feet:

Coaching Tip: If you suspect that your goalie is having difficulty or incorrectly stepping to low shots, use the 3-ball drill seen here. 1. Place three balls two feet out in front of the goalie (bottom left, 5 hole, and bottom right) 2. Have the goalie get set in their stance 3. Point to the ball you want them to step towards 4. Have them freeze so you can examine their step, body position, and stick position

Even though we’re staying on our feet, we still need to lower our center of gravity and get down on low saves.

Staying on our feet doesn’t mean we don’t get down to low to make the save. It’s just that we don’t drop to our knees in this style of low save.

We use standard save technique and drive our top hand to the ball with lead step. 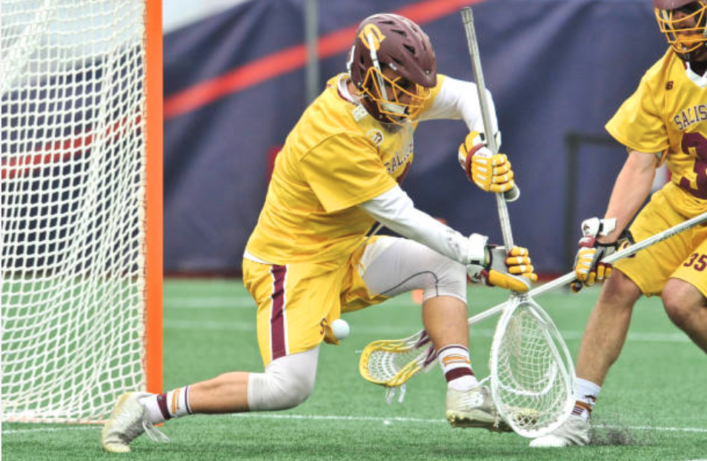 There are a lot of different styles to play goalie and I’ve always said you’ve got to find what works for you.

That said, I feel pretty strongly about goalies not dropping to their knees.

In fact I wrote dropping to knees as a bad habit goalies need to break.

As I discussed above, many times when a goalie ends on the ground they’re just trying to throw whatever body part they can in front of shot, and that’s fine. But – in my opinion –  your default save technique for lows should be to always stay on your feet.

Undo the Habit of Dropping to Knees

So let’s say you’re a goalie who has the habit of dropping to their knees on low shots and you want to break that habit.

How do you do it?

That’s really all I can offer you. Take low shots and practice the proper technique until the habit is gone.

If you drop to your knees for a save, punish yourself by running a full field sprint or doing 25 pushups.

Get tired? Then don’t drop to your knees.

Ultimately there’s no one correct way to play this beautiful position we call lacrosse goalie.

One the variances afforded to the position is your technique for making those low saves.

There are 2 choices: drop down to your knees/butt or stay on your feet.

While both offer pros and cons I feel pretty strongly lacrosse goalies make more saves over time by staying on their feet.

What’s your low save technique? Drop to knees? Or stay on your feet? Leave me a comment down below.

15 thoughts on “Low Saves: Drop to Your Knees or Stay on Your Feet?”