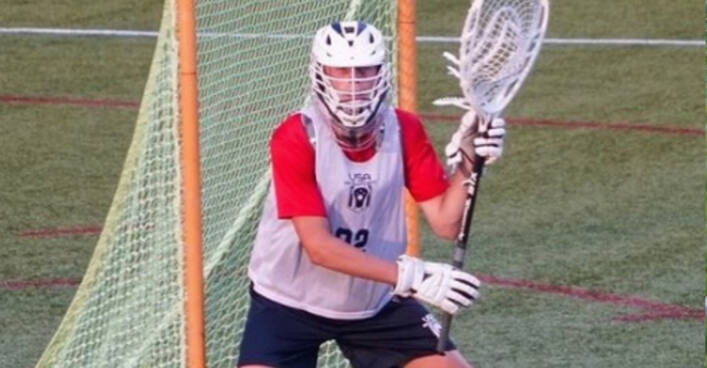 As a lacrosse goalie we need to be adequately prepared to save all types of shots including shots on the run, aka alley dodges.

These are pretty common shots and I’m actually surprised it’s taken this long for someone to ask me a question regarding saving shooter’s shots off of the dodge and on the run.

Thank you for the email and the tips. I love reading your posts and tips. I’m a rising senior at Faith Lutheran High school in Las Vegas, Nevada and the biggest challenge for me is on the run shots, I just can’t really tell where the shots are going.

So when the ball carrier starts top center and dodges down the alley firing a shot on the run, what should be our approach as a goalie to make that save with the highest probability possible?

Be Set for the Shot

By far the biggest problem I see for goalies – when it comes to defending shots on the run – is that they are not set in their stance when the shot is fired.

This is a challenge, not just for shots on the run, but for all shot types. We have to ensure we are set in our ready stance in order to give us a higher probability of making the save.

The complexity with shots on the run is that since the shooter is moving we need to move on our goalie arc as well. Often times when the shooter releases the shot, the goalie is still in the process of moving and not set in that perfect lacrosse goalie stance.

A tactic we can use to put ourselves in better position to make the save is simply turn our hips a little to face the shooter. This allows us to be in a better position on the arc without actually moving.

Of course, when the alley dodger moves sufficiently we would need to move to the next point on our arc but the hip moving method allows you to be in better position without taking those little steps along the arc that completely prohibit “being set”.

One important point in particular for shots on the run is making sure you stay square to the shooter. Make sure your toes are pointing at the shooter and that the shooter is between your toes.

As I said,  it’s harder to get set in your stance for a shot on the run because it requires moving on the arc.

So you really need to practice short quick bursts when you move on the arc. And always land in the next spot in your perfect stance, ready to make a save.

Remember that for the shooter, shooting on the run is harder. They won’t be able to get as much velocity and accuracy on the shots.

So if we keep your movements on the arc short and precise and get set before the shot is released, we’ll have a great chance to save it.

Trail the Shooter By A Step

As a shooter dodges from top center down the alley, a common goalie problem is to move on the arc too soon and too far. Thus the goalie ends up out of position giving the shooter too much open goal to aim for.

As a shooter alley dodges from top center, our position needs to be like the example on the right, however many goalies find themselves moving too far on the arc like the left position. 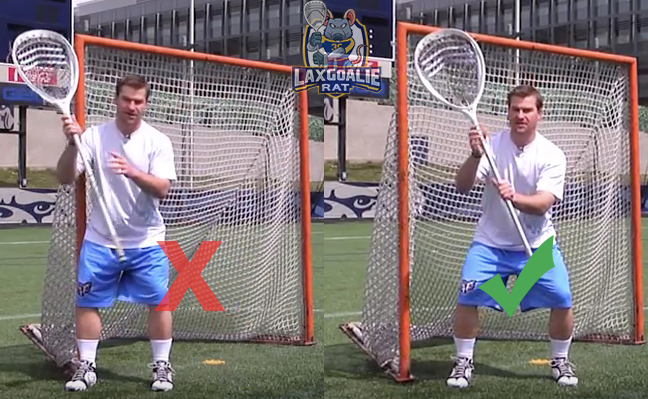 A perfect spot on the arc splits the goal from the shooter’s perspective. Give him two spots to shoot at. Otherwise, you’re baiting the shooter (perhaps unknowingly).

Thus I teach goalies to trail the shooter by a step. As the shooter passes into the next quadrant which necessitates a move on the arc, wait just one extra step before moving.

As a ballcarrier dodges from sector 3 down the alley into sector 4. Wait just an extra step before moving on your arc.

If I’m moving on the arc to keep up with a dodger running down the left-handed alley (3 to 4), I don’t step toward the pipe until he crosses my right foot (which is closest to the pipe).

This will help ensure we end up in the right place on the arc and don’t give the shooter an unknowingly large area of the goal to aim for.

If you’re consistently having trouble saving shots on the run, you may consider adopting a flat arc.

A flat arc is one where the goalie sets up deeper in the goal. Sometimes almost with their heels on the goal line.

The flat arc comes with its set of disadvantages but it also comes with some advantages – primarily less movement.

Moving from spot 3 to spot 4 (referencing the diagram above) is way easier in the flat arc as there is less movement required. Really you just move your feet a tiny bit and square up the shooter.

The result is that goalies playing a flat arc will often be in better position during alley dodges than the goalies who a higher 5-point arc.

So it’s something to consider if you’re consistently getting beat by alley dodges.

Practice Shots on the Run

As a goalie coach, when warming up a goalie or training a goalie in practice, be sure to shoot shots on the run.

It’s a different save type. You still need to understand the basics of making a save but saving a shot on an alley dodge is more about being in the right place on the arc and being set in a great lacrosse goalie stance.

There are tons of drills that involve shooters letting it fly while on the run. So be sure to incorporate your goalies into the action so they see their fair share of shots on the run.

Regarding the last part of the issue the goalie referenced in the intro: “I can’t really tell where the shot is going”.

If the shooter is outside of 8 yards, there is no need to anticipate or guess.

Just focus on picking up the ball in the shooter’s stick and seeing the shot as soon as possible. Then make the right save movement to execute the save.

If the shooter is inside of 8 yards it gets a little trickier. Since this gives us goalies way less time to react, we really need to read the shooter in order to increase the probability of making the save.

The shooter’s shoulders will give away a lot of information. Especially on shots on the run.

If they’re angled downwards at the time of the shot release, we can be reasonably sure the shot is going low.

And vice versa, if the shoulders are angled slightly upwards or even parallel to the ground, we can look for that shot to be waist and up.

Sure, there are shooters who can fake body language signals to fool the goalie but for shots under 8 yards we must read the signals we’re given. If a shooter fakes the body language of a low shot then sticks it top shelf from inside 8 yards – you know what, they deserve that goal. Move onto the next one.

Reading the shooter’s body language for shots inside of 8 yards will help the goalie get an edge and tell with more certainty where the shot is going.

Videos to Improve Shots on the Run Save

MLL goalie Brian Phipps put together a great video with tips on saving shots on the run:

Scott Rodgers also has a great instructional video about picking up a shot on the run:

Here is Tim Troutner from the PLL Redwoods breaking down his approach for saving alley dodge shots:

Finally it also helps lacrosse goalies when they know what their offensive opponent is trying to do. Check out this video from Paul Rabil where he gives tips for shooting on the run:

Saving shots on the run is something that all lacrosse goalies need in their repertoire.

It’s a common shot type. Luckily for us goalies, it’s harder to get velocity and accuracy on a shot on the run. So we really need to ensure we’re set up in great stance on the right place on the arc to limit what a shooter sees.

A benefit of the flat arc is less movement so if you’re consistently getting beat on alley dodges shots consider trying that.

Anyone have any other tips for saving shots on the run? Would love to hear about them in the comments down below.

4 thoughts on “Goalie Tips for Saving Shots on the Run” 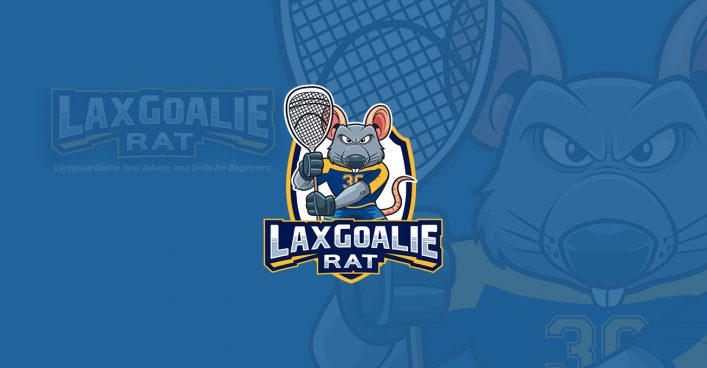