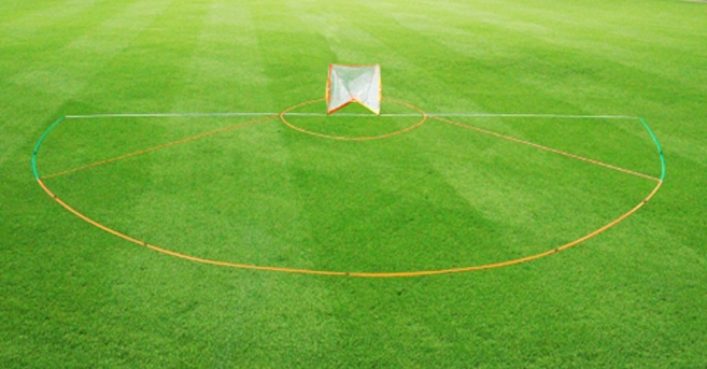 If you’re a lax rat, odds are you’ve heard of the Tierney family.

Bill Tierney is the current head coach of the University of Denver lacrosse program where Trevor Tierney is an assistant coach. He also coached at Princeton leading them to 6 national championships.

Trevor Tierney was a star goalie at Princeton from 1998-2001 where he won a host of accolades including 2 national championships.

You don’t win national championships without a great goalie. And Trevor Tierney was exactly that – two time All-American, NCAA goalie of the year, leader in goals against average (GAA) and save percentage.

If there is one thing Trevor Tierney is known for (besides dominating in goal) its his flat arc style of play in the crease.

So what is a flat arc?

The lacrosse goalie arc is a semi-circle in front of the goalie on which a goalie will setup to receive shots from different parts of the field.

There are many different styles of play when it comes to lacrosse goalies. One element that various among goalies is the arc on which they play.

Some goalies preferring to play a high arc closer to the shooter and other goalies like Tierney a flat arc where you setup closer to the goal line.

For a full description of lacrosse goalie arcs checkout my article – The 3 types of Lacrosse Goalie Arcs I Teach: which is right for you?

Trevor Tierney isn’t the only the lacrosse goalie to have success with the flat arc.

In fact if you look at today’s top goalie talent playing in the MLL most of them are using a flat arc.

Benefits of the Flat Arc

There are 2 main reasons why the flat arc is beneficial over a high arc and a normal arc.

It’s very easy to setup in the right position in the flat arc. That’s because you’re on the goal line, or very close to it, regardless of where the shooter may be.

Here are the 5 positions on the flat arc: 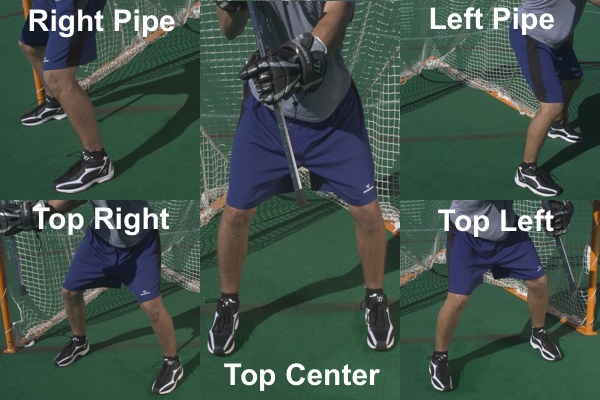 In fact a simple way to think about it is simply square to your hips to the shooter and you’re pretty much in the right position on the flat arc.

If you’re playing a high arc and a middie sweeps down the alley it’s incredible easy to get out of position, giving the shooter an open side of the goal you might not be aware of.

This is simply not the case when playing the flat arc.

It’s rare that you get “lost” when moving pipe to pipe in the flat arc.

While playing the flat arc may not reduce the angle like a higher arc would, the flat arc certainly simplifies the position when it comes to always being square to the shooter and in the right position.

When you play further away from the shooter, it’s simple physics that you have more time react.

Now the difference in time you gain by playing a foot back may not sound like much, but sometimes a 1/10th of a second is the difference between a save and a goal.

As you progress up the levels from junior high to high school to college to the pros, the shooters will fire harder and harder. The accuracy also increases too.

The new advancements in lacrosse stick technology have also given shooter more MPH on their shots.

So having just that extra moment to see the ball and react to it is often all it takes to make the save. 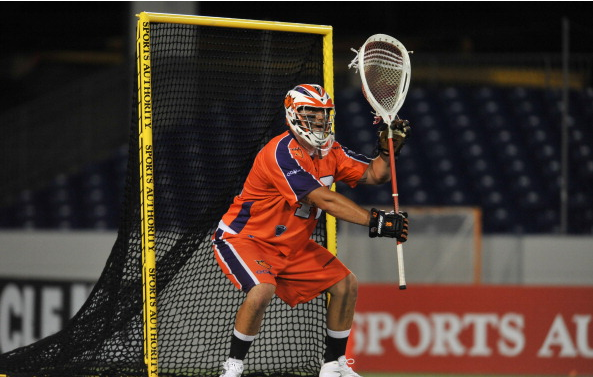 MLL goalie Scotty Rodgers and many others are moving towards more of a flat arc in their goalie play.

Many high arc fans cite hockey goalies as a reason that lacrosse goalies should also use the high arc.

But the theory and technique of saving lacrosse balls is different than saving hockey pucks.

In lacrosse we’re trying to “catch” the ball with our stick whereas in hockey the goalies try to “block” the puck.

The high arc style works in ice hockey because: first, the hockey goal is smaller, measuring only 4 feet x 6 feet compared to the lacrosse goalie which is 6′ x 6′, meaning they have to cover less area.

And secondly, the style works because hockey goalies only see shots from one angle. That is, from the ice.

Lacrosse goalies, especially in the men’s game, must stop shots from a multitude of angles. Low to high shots, low to low shots, high to high shots, sidearm shots, worm burners, … , the list goes on and on.

Hockey goalies attempt to block the nearly the entire goal as they come out on a high arc. But due to the size of the goalie and our lack of pads, even when lax goalies play a high arc, the shooter sees tons of net.

As a result, it makes sense for the hockey to play a high arc since it cuts down the angle and limits the amount of movement they need to make.

But it doesn’t always make sense for lacrosse goalies to play on that same high arc.

Another key element of Trevor Tierney’s flat arc style of play is how you attack the ball on the shot.

Instead of stepping at a 45 degree angle to meet the ball, Trevor steps sideways – at a 90 degree angle.

Stepping sideways instead of at a 45 degree angle gives you more time to see the ball. Albeit with this approach the goalie does have to cover a further distance to reach shots headed to the corners.

If the shot is coming at you, there’s no need to step. Simply make the save with your stick as your body is already behind the ball.

If the shot comes to either side you take a lateral step in that direction to get in front of the ball while moving your stick to make the save.

This lateral movement is similar to ice skating and you can envision pushing off one skate to make a quick and aggressive movement to make the save.

Like other arcs its extremely important that you have quick reactions so be to practice drills which increase goalie’s reaction time.

In the men’s game many offenses will quickly swing the ball to the weak side after drawing a slide. This rapid ball movement requires the goalie to move pipe to pipe on his arc which, as we discussed, is easier on the flat arc.

For women, I don’t see this type of rapid movement required from the goalies and thus many may see more of a benefit playing a normal arc.

Additionally, the majority of the shots women will see will be closer (within 6 yards) but with less velocity compared to the men’s game. Thus they may benefit from the higher arcs where the goalie doesn’t have to move as much to reach the corners.

But of course it depends on the keepers individual style. Are they wearing bulky leg pads which makes movement difficult? If so, a flatter arc might be more advantageous.

Tierney released his goalie DVD Evolution in Lacrosse Goaltending as a series of instructional videos on YouTube. Here he discusses his theory behind playing a flat arc:

This video should be required viewing for anyone who wants to play a flat arc. Here Trevor Tierney demonstrates the flat arc while a shooter moves across the goal. Really good to understand proper positioning while playing the flat arc.

Here Tierney discusses his strategy of stepping laterally vs. stepping at a 45 degree angle:

In this final video you can see a flat arc and lateral stepping in action:

How Do I Know Which Goalie Arc is best for my goalie?

The short answer is, there’s no easy way to tell. There’s pros and cons to every style of play.

If you’re a brand new goalie, start with a normal arc and see how that feels.

If you’re getting lost when middies sweep or having trouble moving from pipe to pipe when the offense moves the ball, consider stepping back to a flatter arc.

Also, if you feel you need a bit more time to see and react to shots trying taking a step back on your arc.

Basically during practice I advise goalies experiment with different lacrosse goalie arc styles and find what works best for them.

It’s important to mention that I’m not saying a flat arc is the only way to play.

I teach 3 different lacrosse goalie arcs and I think there’s a time and place for all 3 of them. Even the same goalie can use different arcs during different moments or situations in the game.

However if you’re struggling with high velocity shots or frequently find yourself out of position on your arc then consider trying a flat arc with a flat step for your saves.

Different goalies have different strengths and weaknesses and thus there is no one size fits all approach for success in this position.

Anyone tried a flat arc? Let me know in the comments.